Highway Reward has been the site of copper and gold mining since 1953, starting as an open-cut gold mine until 2002 and followed by underground mining until 2005. The mine site was decommissioned and partially rehabilitated according to a closure plan developed in 2005.

Valenza Engineering was engaged alongside Mining One to complete an updated hydrogeological assessment in 2013 to ascertain the likelihood of contaminants migrating offsite. 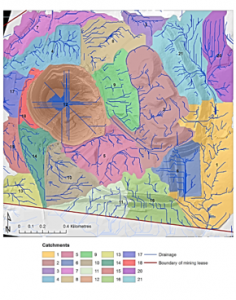 A groundwater model existed for the site which needed to be calibrated to incorporate new data.

Our team conducted field investigation to establish surface water and groundwater calibration parameters, improve the existing model and assess potential contaminant migration; reporting on potential movement of contaminants of concern at the site. Long-term modelling showed the mine pit acting as a hydrogeological sink; groundwater flowed to this point confining contaminants within the site.

A surface water runoff model was developed which identified subcatchments of overland flow that should be directed into the pit to avoid potential offsite contaminant migration. Earthworks were undertaken to capture and redirect this flow to the pit, which effectively reduced contaminant loads to below trigger levels.